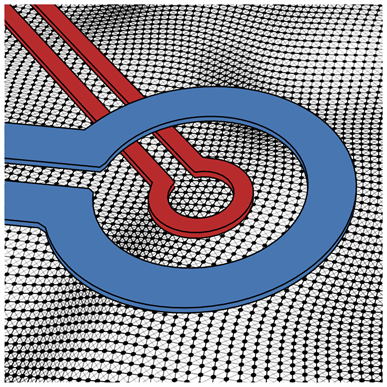 This work demonstrates the design, control, and measurement of a model superconducting system to simulate the spatial evolution of superfluid density and phase coherence in 2D superconductors with micron-scale disorder.

The work was selected as an Editors' Suggestion by the journal Physical Review B.

The high-resolution data reveal several previously unobserved correlated Chern insulating states as well as sharp phase transitions between them. These behaviors arise due to the interplay between the crystalline moiré superlattice and the applied magnetic field, together with various symmetry-breaking terms, and the team reconstructs the many-body spectrum and phase diagram of MATBG as a function of carrier density and magnetic field.

The work was completed in collaboration with the group of Dr. Zhi-Xun Shen, Professor of Physics at Stanford University who corroborated the appearance of the Chern insulators with microwave impedance microscopy, and with theoretical insight provided in part by Dr. Philip Phillips, Professor of Physics at the University of Illinois, Urbana-Champaign, highlighting the multi-institution collaborative nature of the research.

"Nevertheless she persisted (over Zoom)" won the People's Choice Award

QSQM’s entry received the most votes from public to win Science in the Time of Covid Contest, sponsored by the Department of Energy’s Office of Basic Energy Sciences (DOE BES) at the 2021 EFRC-Hub-CMS-CCS Principal Investigators’ Meeting.

Fahad Mahmood, Assistant Professor in the department of Physics at the University of Illinois, Urbana-Champaign received the National Science Foundation’s CAREER Award.

A member of the EFRC-QSQM, Mahmood reported the first observations of the optical phase mode in (TaSe4)2I via THz emission spectroscopy, measured a dynamic Kerr effect induced by strong THz pulses, and made the first observation of Kramers-Weyl fermions in (TaSe4)2I via circular dichroism laser-ARPES. At EFRC, he is an active member of the two-electron EPR spectroscopy thrust and the steering committee.

Physics professor Nadya Mason is among 120 newly elected U.S. members – 59 of whom are women, the most elected in a single year – and 30 international members in recognition of their distinguished and continuing achievements in original research.

“The historic number of women elected this year reflects the critical contributions that they are making in many fields of science, as well as a concerted effort by our academy to recognize those contributions and the essential value of increasing diversity in our ranks,” said National Academy of Sciences President Marcia McNutt. “I am pleased to welcome all of our new members, and I look forward to engaging with them in the work of the National Academies.”

At the QSQM Center, Nadya Mason is fabricating TCI-superconductor interface materials as well as arrays for benchmarking the DR scanner instrument, and is also performing transport measurements of candidate topological superconductors as well as strange metal-normal metal interfaces.

A Theoretical Model for 2e ARPES

Dr. Dirk Morr, Professor of Physics at the University of Illinois, Chicago, has developed a theoretical model for 2-electron coincidence spectroscopy (2e ARPES) that can directly measure the center of mass momentum, spin pairing state and energy gap of Cooper pairs in a superconductor.

Dr. Morr is working in a team funded by the Department of Energy (DoE) as an Energy Frontier Research Center (EFRC) for Quantum Sensing and Quantum Materials (QSQM). Other team members include Dr. Peter Abbamonte, Director of the Center and Dr. Fahad Mahmood both at the University of Illinois, and Dr. Tom Devereaux at the Stanford University and the SLAC National Accelerator Laboratory.