The Energy Frontier Research Center (EFRC) Quantum Sensing and Quantum Materials (QSQM) is highly-collaborative spanning three institutions, with additional team members and leadership from University of Illinois-Chicago and the SLAC National Accelerator Laboratory. On campus, the program draws together experts in quantum information science, physics and materials science from the lllinois Quantum Information Science and Technology Center (IQUIST), from the Physics Department, Materials Science and Engineering, and the Materials Research Laboratory.

The center aims to develop and apply nontrivial quantum sensing methods to measure and unravel mysteries associated with three families of quantum materials. These families are exotic superconductors, topological crystalline insulators, and strange metals. This material is based upon work supported by the U.S. Department of Energy Office of Science, Office of Basic Energy Sciences under Award number DE-SC0021238.

To carry out this mission, we plan to develop three new, cutting-edge quantum sensing instruments.

The scanning qubit microscope (SQM), which consists of a single flux qubit integrated into a tip that may be scanned over the surface of a material, as illustrated in Figure 1. The state of a qubit is exceedingly sensitive to charge and flux noise, making an SQM a highly sensitive probe of local charge and spin fluctuations near surfaces or interfaces. 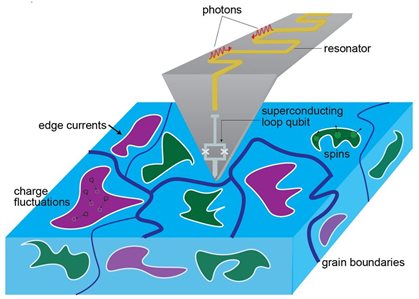 Figure 1 Conceptual illustration of a scanning qubit microscope, which consists of a tip-mounted flux qubit that may be scanned in close proximity to a heterogeneous quantum material.

The second instrument is a two-electron EPR spectrometer, which uses correlated Einstein-Podolsky-Rosen (EPR) pairs of electrons to reveal hidden global interactions in materials. This instrument, illustrated in Figure 2, can be operated in two different modes. In the first, double photoemission, the sample is illuminated with ultrafast XUV photon pulses that eject correlated electron pairs from the surface. The angle-and energy-distribution of these pairs can be used to reconstruct the anomalous Green’s function of the material. In the second, two-electron Rutherford scattering, time coincident ultrafast electron bunches are scattered off one another near a material surface, revealing the renormalized interaction between quasiparticles. 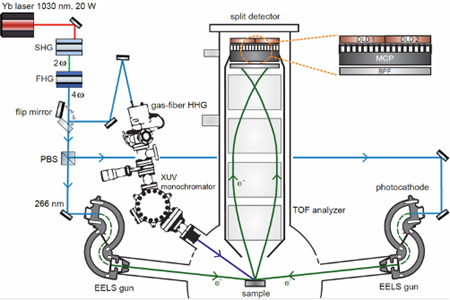 The third, x-ray four-wave mixing instrument uses correlated pairs of photons to measure the nonlinear optical response of materials at nonzero momentum. Illustrated in Figure 3, this experiment is carried out at a free-electron laser facility, such as the LCLS facility at SLAC National Accelerator Laboratory. This instrument will directly measure the global geometry of Hilbert  space of a material, revealing previously  undetected topological phenomena, and will also identify new broken symmetries in materials that reveal exotic and previously unobserved phases of matter. 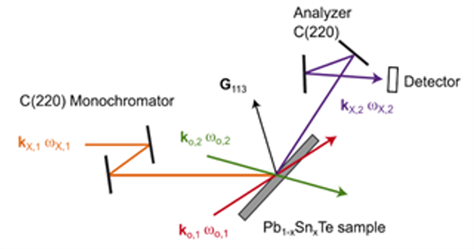 QSQM will use these to study the origin of exotic superconductivity, the signatures of topological order, and the nature of strange metal behavior in a wide variety of quantum materials.

The new quantum sensing techniques we develop will enable us to unravel the most compelling mysteries of quantum materials. Scanning qubit microscopy will allow us to detect not only localized electronic states but also sources of dissipation and dephasing in materials over a wide frequency range. It will measure the frequencies of excitations and fluctuations in materials with unprecedented sensitivity. It will enable us to determine whether corner states and hinge states exist in higher-order topological insulators, whether new types of zero-energy states emerge at domain walls in unconventional superconductors, and reveal how strange metals screen charge.

Two-electron EPR spectroscopy will improve our scientific understanding of all materials in which interactions play a nontrivial role, including magnetic materials, strange metals, doped Mott insulators, interacting topological phases, and charge and spin density wave materials. It can directly reveal the pairing boson in most unconventional superconductors, as well as the mechanism behind other types of Fermi surface instabilities in quantum materials.

Nonlinear optics is widely known to be a highly sensitive probe of broken symmetries in materials. However, such measurements have always been restricted to small momenta. Our momentum-resolved x-ray nonlinear optics instrument will allow us to detect new categories of phenomena including the predicted nonlinear axion optical response in topological crystalline insulators, and whether charge carriers in strange metals flow independently or via collective hydrodynamic transport.

Together, these schemes will provide new knowledge about interacting and topological materials, facilitate the discovery of new materials, and define new directions for future spectroscopic probes.